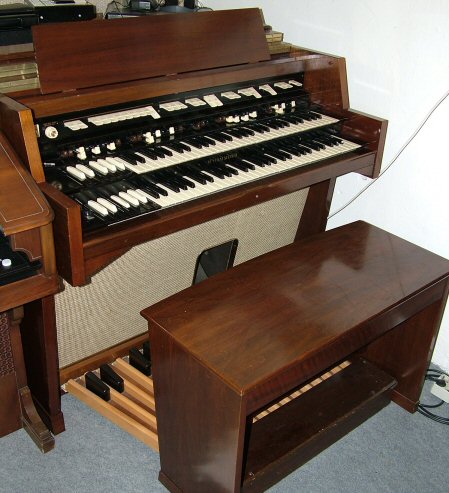 Hammond vintage organs currently are very popular, so one of these tone-wheels is a ‘must-have’. The B3 or A100 are well known und thus - very expensive. Less popular is the H100. I compared it side-by-side with several A100s and I found out that there is almost no sonic difference! Everybody who says there is a difference, does so because he wants not get blamed of having bad ears J.

Much cheaper nowadays and having more features, it is the last one of this exciting technology generation.

With my work on this furniture I noticed, that many of repair activities are in the fine-mechanic area, rather than electronic – because there are not so many electronic components inside! I replaced almost all the electrolytic capacitors of the valve amplifier, power supply and harp sustain.

Here are some observations by myself:

-         It does not have the famous waterfall keyboard. But I like it, because I prefer the pipe organ's touch.

-         Dual scanner vibratos with many variations. I plugged an additional Leslie to this organ and I have to state, the scanner vibrato is not much worse! Only the acceleration is missing. This is the reason, why the Leslie is luckier on my Conn now.

-         Pedal uses 8 notes per key (B3: 2). Unfortunately they are not directly accessible by drawbars. Four footages pairs of are switched on common busses and additionally mixed by a resistor matrix so the 4 drawbars control the volumes of mixtures. I don’t like that, that’s why I removed the resistor matrix and the drawbars directly control the hard-wired footages which are: 16’ (+8' for the 8 notes), 8’+4’, 2 1/3’ + 2',  1 1/3 + 1 3/5. The pedal has a nice sustain feature which is accomplished by  solenoids for each key which hold down the contacts as needed. Repairing these mechanics is not easy. The pedal unit has very short cables to the console, you can pull the unit only by 40cm, meaning you have to crawl on your knees and it is very narrow. The service manual says that you had to pull out the bar lines to replace the solenoids, I had no idea how to do this under these circumstances on my knees! Only with using brute force I managed to bend the holders to get a weak solenoid into working condition again.

-         Dull sound? Some people say, that H100 sounds more dull, because Hammond technicians wanted to remove key klicks and so. I cannot agree with mine, the key click is excellent, all dirt available! I found nothing on the circuit diagram which points to a low pass filtering in between the keys and the amplifier. However, the generator output levels could be modified according to the original B3 characteristics. I did not touch this until now, because the generator has to be pulled out of the console to reach all the calibration points.

-         Harp effect: 4 octaves of the upper keyboard have a harp sustain effect. This is achieved by electronic keyers on a huge extra board. I replaced all electrolyte caps because many of them went bad over the years.

-         Percussion. The H100 has many preset tabs for percussion effects like guitar and bells. None of these are the beloved 4’ and 2 2/3’ percussions needed for jazz performances. For this reason the previous owner customized additional switches and potentiometers, which sound not bad.